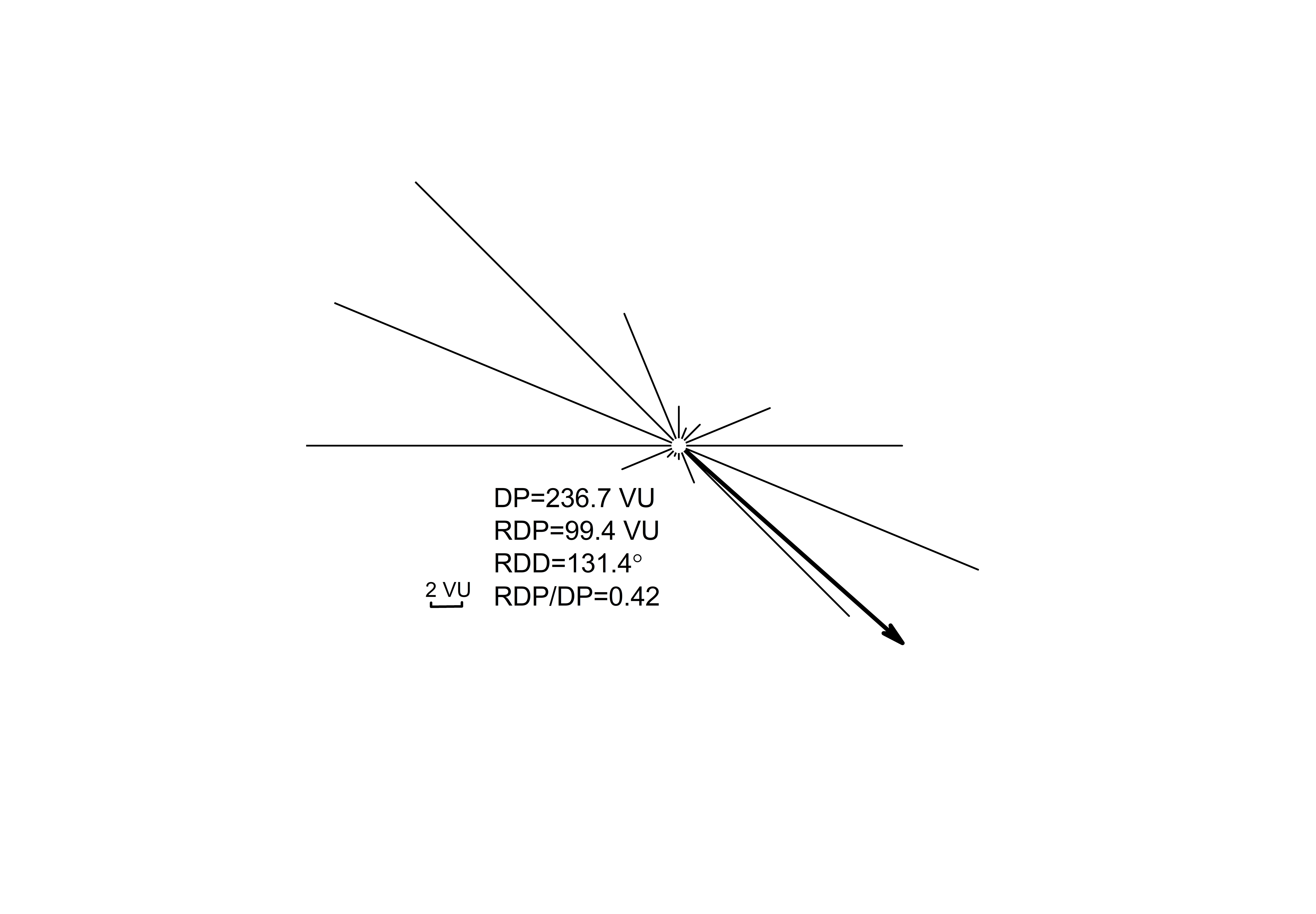 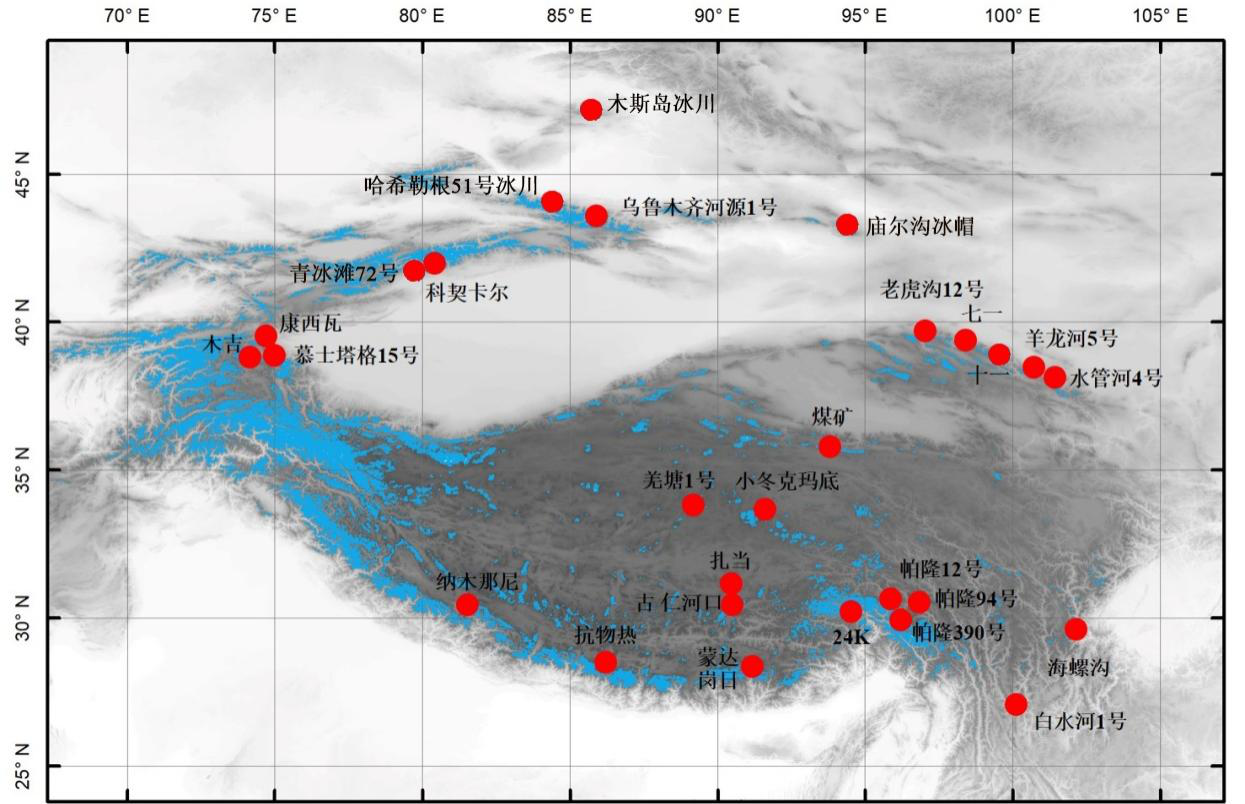 Glacial mass balance is one of the most important glaciological parameters to characterize the accumulation and ablation of glaciers. Glacier mass balance is the link between climate and glacier change, and it is the direct reflection of glacier to the regional climate. Climate change leads to the corresponding changes in the material budget of glaciers, which in turn can lead to changes in the movement characteristics and thermal conditions of glaciers, and then lead to changes in the location, area and ice storage of glaciers. The monitoring method is to set a fixed mark flower pole on the glacier surface and regularly monitor the distance between the glacier surface and the top of the flower pole to calculate the amount of ice and snow melting; In the accumulation area, the snow pits or boreholes are excavated regularly to measure the snow density, analyze the characteristics of snow granular snow additional ice layer, and calculate the snow accumulation; Then, the single point monitoring results are drawn on the large-scale glacier topographic map, and the instantaneous, seasonal (such as winter and summer) and annual mass balance components of the whole glacier are calculated according to the net equilibrium contour method or contour zoning method. The data set is the annual mass balance data of different representative glaciers in the Qinghai Tibet Plateau and Tianshan Mountains, in millimeter water equivalent. 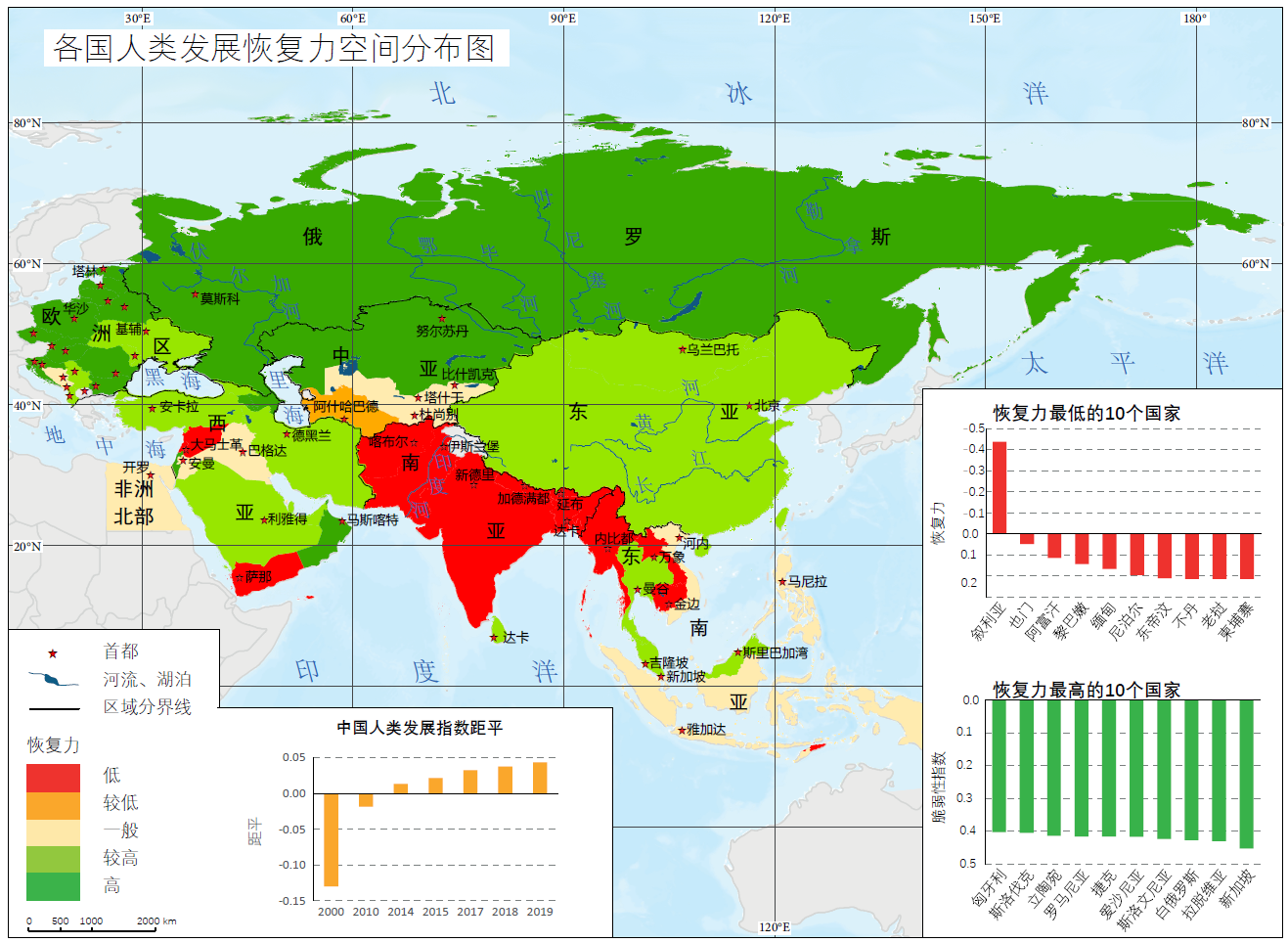 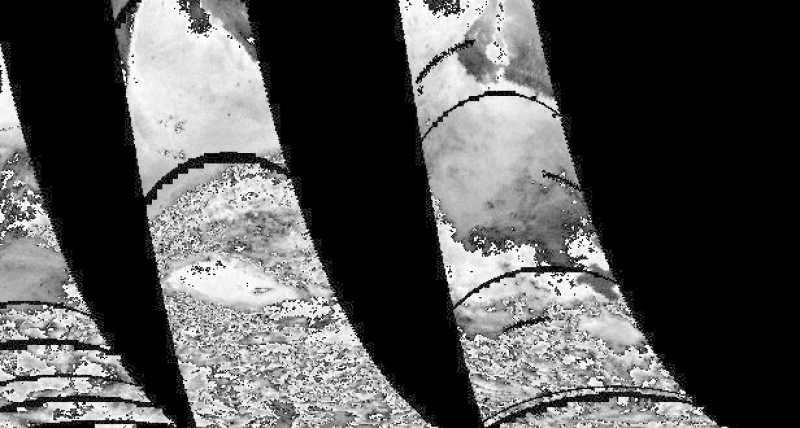 This data set includes the microwave brightness temperatures obtained by the spaceborne microwave radiometer SSM/I carried by the US Defense Meteorological Satellite Program (DMSP) satellite. It contains the twice daily (ascending and descending) brightness temperatures of seven channels, which are 19H, 19V, 22V, 37H, 37V, 85H, and 85V. The Specialized Microwave Imager (SSM/I) was developed by the Hughes Corporation of the United States. In 1987, it was first carried into the space on the Block 5D-/F8 satellite of the US Defense Meteorological Satellite Program (DMSP) to perform a detection mission. In the 10 years from when the DMSP soared to orbit in 1987 to when the TRMM soared to orbit in 1997, the SSM/I was the world's most advanced spaceborne passive microwave remote sensing detection instrument, having the highest spatial resolution in the world. The DMSP satellite is in a near-polar circular solar synchronous orbit; the elevation is approximately 833 km, the inclination is 98.8 degrees, and the orbital period is 102.2 minutes. It passes through the equator at approximately 6:00 local time and covers the whole world once every 24 hours. The SSM/I consists of seven channels set at four frequencies, and the center frequencies are 19.35, 22.24, 37.05, and 85.50 GHz. The instrument actually comprises seven independent, total-power, balanced-mixing, superheterodyne passive microwave radiometer systems, and it can simultaneously measure microwave radiation from Earth and the atmospheric systems. Except for the 22.24 GHz frequency, all the frequencies have both horizontal and vertical polarization states. Some Eigenvalues of SSM/I Channel Frequency (GHz) Polarization Mode (V/H) Spatial Resolution (km * km) Footprint Size (km) 19V 19.35 V 25×25 56 19H 19.35 H 25×25 56 22V 22.24 V 25×25 45 37V 37.05 V 25×25 33 37H 37.05 H 25×25 33 85V 85.50 V 12.5×12.5 14 85H 85.50 H 12.5×12.5 14 1. File Format and Naming: Each group of data consists of remote sensing data files, .JPG image files and .met auxiliary information files as well as .TIM time information files and the corresponding .met time information auxiliary files. The data file names and naming rules for each group in the SSMI_Grid_China directory are as follows: China-EASE-Fnn-ML/HaaaabbbA/D.ccH/V (remote sensing data); China-EASE-Fnn -ML/HaaaabbbA/D.ccH/V.jpg (image file); China-EASE-Fnn-ML/HaaaabbbA/D.ccH/V.met (auxiliary information document); China-EASE-Fnn-ML/HaaaabbbA/D.TIM (time information file); and China-EASE- Fnn -ML/HaaaabbbA/D.TIM.met (time information auxiliary file). Among them, EASE stands for EASE-Grid projection mode; Fnn represents carrier satellite number (F08, F11, and F13); ML/H represents multichannel low resolution and multichannel high resolution; A/D stands for ascending (A) and descending (D); aaaa represents the year; bbb represents the Julian day of the year; cc represents the channel number (19H, 19V, 22V, 37H, 37V, 85H, and 85V); and H/V represents horizontal polarization (H) and vertical polarization (V). 2. Coordinate System and Projection: The projection method is an equal-area secant cylindrical projection, and the double standard latitude is 30 degrees north and south. For more information on EASE-GRID, please refer to http://www.ncgia.ucsb.edu/globalgrids-book/ease_grid/. If you need to convert the EASE-Grid projection method into a geographic projection method, please refer to the ease2geo.prj file, which reads as follows. Input Projection cylindrical Units meters Parameters 6371228 6371228 1 /* Enter projection type (1, 2, or 3) 0 00 00 /* Longitude of central meridian 30 00 00 /* Latitude of standard parallel Output Projection GEOGRAPHIC Spheroid KRASovsky Units dd Parameters End 3. Data Format: Stored as binary integers, Row number: 308 *166,each datum occupies 2 bytes. The data that are actually stored in this data set are the brightness temperatures *10, and after reading the data, they need to be divided by 10 to obtain true brightness temperature. 4. Data Resolution: Spatial resolution: 25 km, 12.5 km (SSM/I 85 GHz); Time resolution: day by day, from 1978 to 2007. 5. The Spatial Coverage: Longitude: 60°-140° east longitude; Latitude: 15°-55° north latitude. 6. Data Reading: Each group of data includes remote sensing image data files, .JPG image files and .met auxiliary information files. The JPG files can be opened with Windows image and fax viewers. The .met auxiliary information files can be opened with notepad, and the remote sensing image data files can be opened in ENVI and ERDAS software. 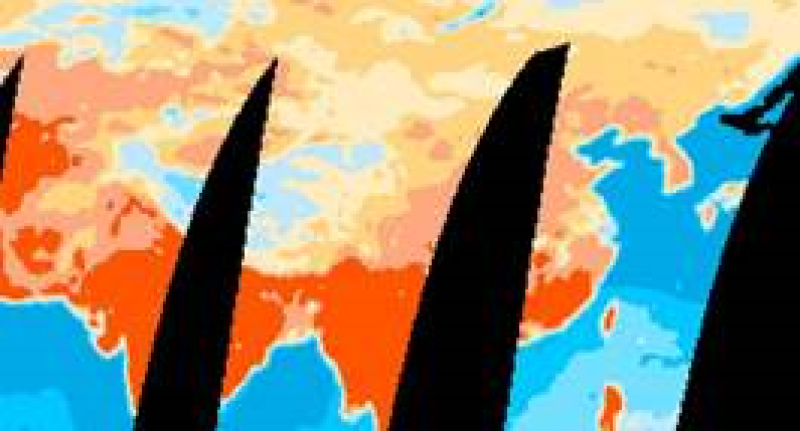 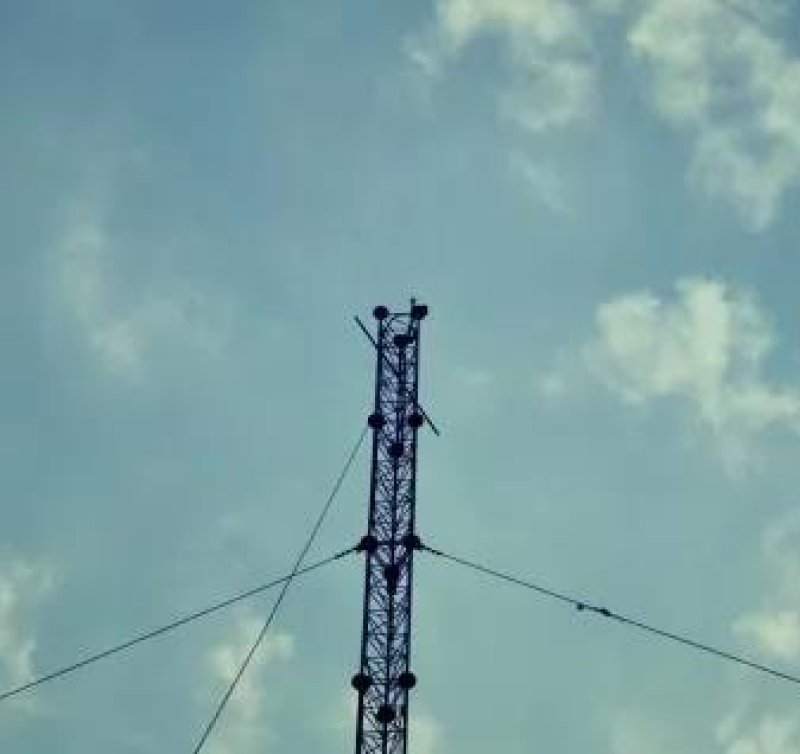 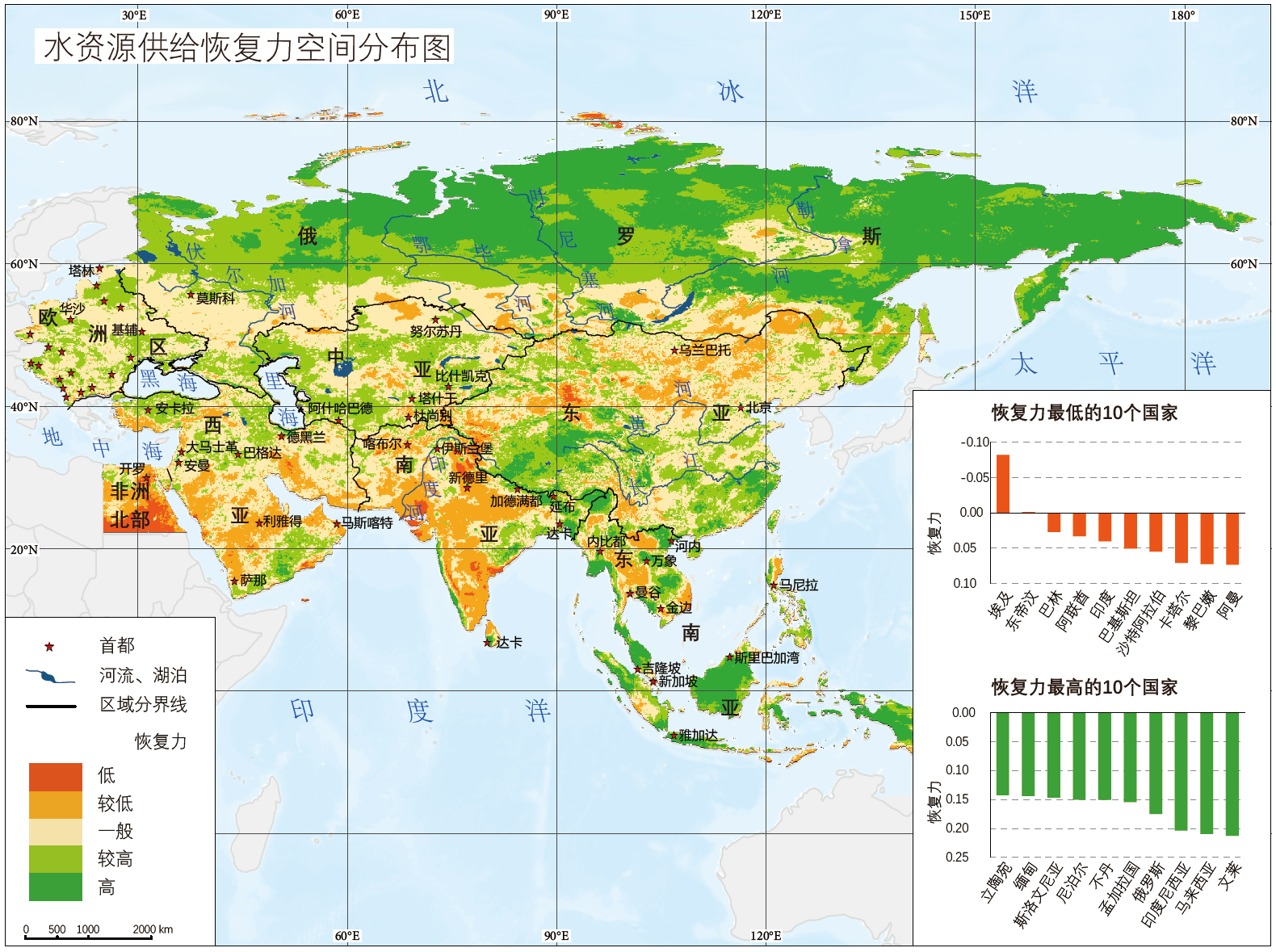 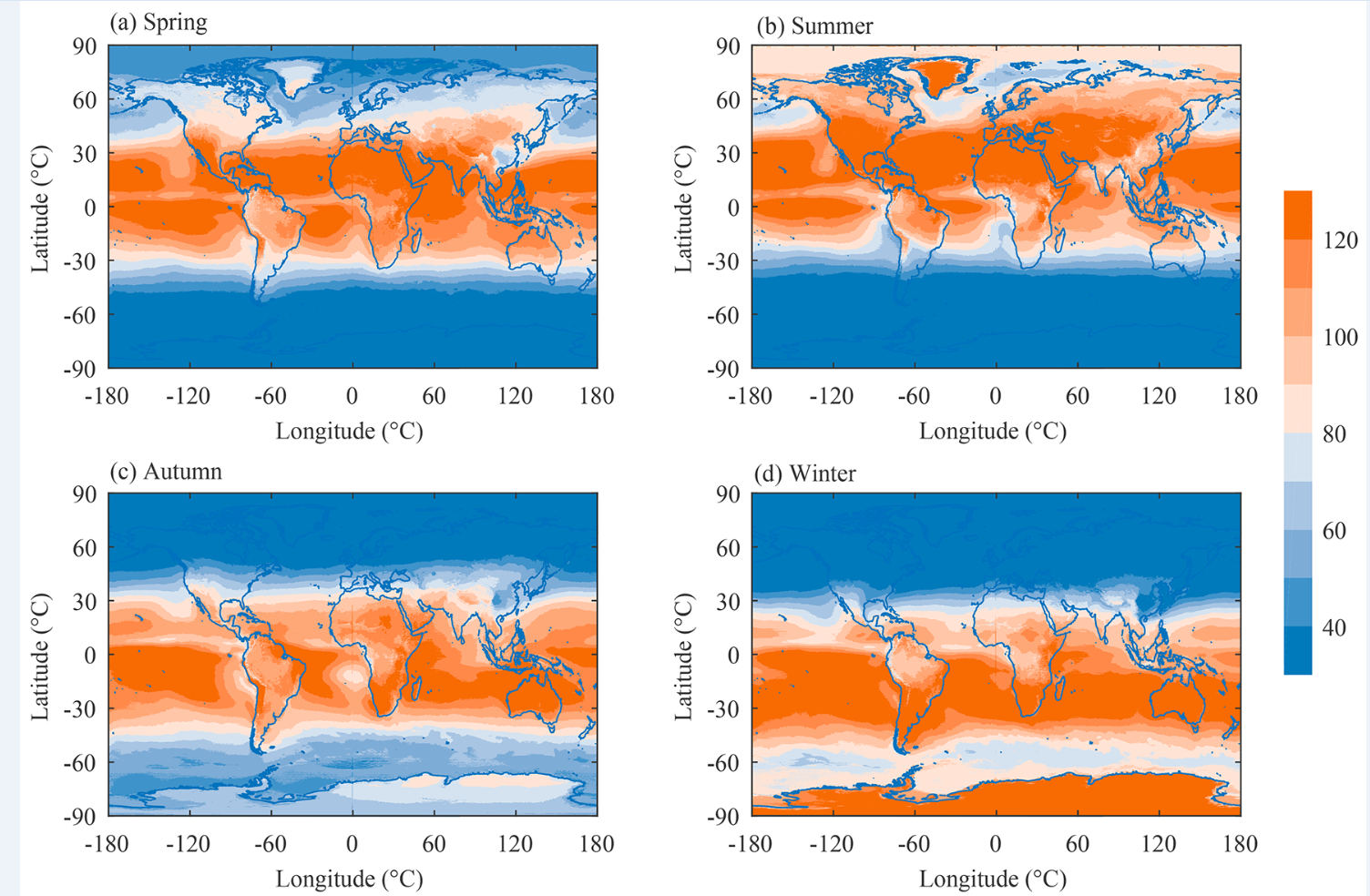 Photosynthetically active radiation (PAR) is fundamental physiological variable driving the process of material and energy exchange, and is indispensable for researches in ecological and agricultural fields. In this study, we produced a 35-year (1984-2018) high-resolution (3 h, 10 km) global grided PAR dataset with an effective physical-based PAR model. The main inputs were cloud optical depth from the latest International Satellite Cloud Climatology Project (ISCCP) H-series cloud products, the routine variables (water vapor, surface pressure and ozone) from the ERA5 reanalysis data, aerosol from the Modern-Era Retrospective analysis for Research and Applications, Version 2 (MERRA-2) products and albedo from Moderate Resolution Imaging Spectroradiometer (MODIS) product after 2000 and CLARRA-2 product before 2000. The grided PAR products were evaluated against surface observations measured at seven experimental stations of the SURFace RADiation budget network (SURFRAD), 42 experimental stations of the National Ecological Observatory Network (NEON), and 38 experimental stations of the Chinese Ecosystem Research Network (CERN). The instantaneous PAR was validated at the SURFRAD and NEON, and the mean bias errors (MBEs) and root mean square errors (RMSEs) are 5.6 W m-2 and 44.3 W m-2, and 5.9 W m-2 and 45.5 W m-2, respectively, and correlation coefficients (R) are both 0.94 at 10 km scale. When averaged to 30 km, the errors were obviously reduced with RMSEs decreasing to 36.3 W m-2 and 36.3 W m-2 and R both increasing to 0.96. The daily PAR was validated at the SURFRAD, NEON and CERN, and the RMSEs were 13.2 W m-2, 13.1 W m-2 and 19.6 W m-2, respectively at 10 km scale. The RMSEs were slightly reduced to 11.2 W m-2, 11.6 W m-2, and 18.6 W m-2 when upscaled to 30 km. Comparison with the other well-known global satellite-based PAR product of the Earth's Radiant Energy System (CERES) reveals that our PAR product was a more accurate dataset with higher resolution than the CRERS. Our grided PAR dataset would contribute to the ecological simulation and food yield assessment in the future. 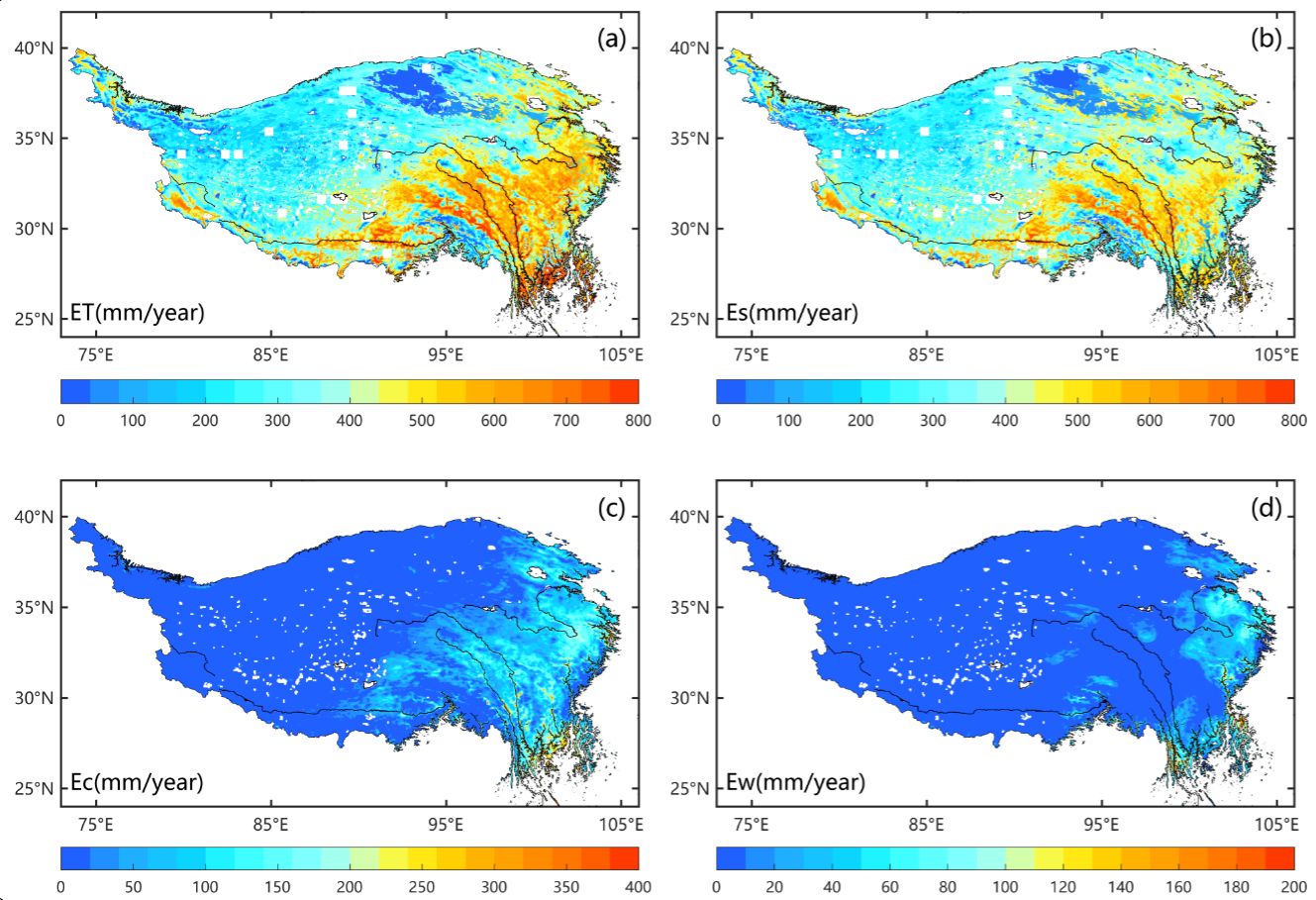 Evapotranspiration (ET) is an very important water balance component for the “Asia water tower”, Tibetan Plateau (TP). However, accurately monitoring and understanding the spatial and temporal variability of ET components (soil evaporation-Es, canopy transpiration-Ec, and intercepted water evaporation-Ew) over the TP remains very difficult, due to the scarcity of observational data for this remote area. Here, the 37 years (1982-2018) monthly ET components on the TP were produced using the MOD16-STM model, which uses the recently available datasets of soil properties, meteorological conditions, and remote sensing. The estimated ET correlates very well with measurements from 9 flux towers, with low root mean square errors (RMSE=13.48 mm/month) and mean bias (MB=2.85 mm/month), and the coefficient of determination (R2=0.83) and the index of agreement (IOA=0.92). The annual averaged ET for the whole TP (specified with an elevation higher than 2500m) is about 0.93±0.037 Gt/year. The main contribution of ET on the TP comes from the soil, with Es accounted for more than 84% of ET. The ET showed a significantly increasing trend with rates of about 1 to 4 mm/year (p<0.05) over most parts of the central and eastern TP, while a significantly decreasing trend with rates of -3 to -1 mm/year was shown in the northwestern TP. The increasing rate of ET in TP over the past 37 years is around 0.96 mm/year. The increase in ET over the entire TP from 1982 to 2018 can be explained by warming and wetting during the same period. MOD16-STM ET exhibited acceptable performance at TP, which was demonstrated by comparison with previous studies. It can adequately represent the actual ET and can be used in research on water resources management, drought monitoring, and ecological change, for example. 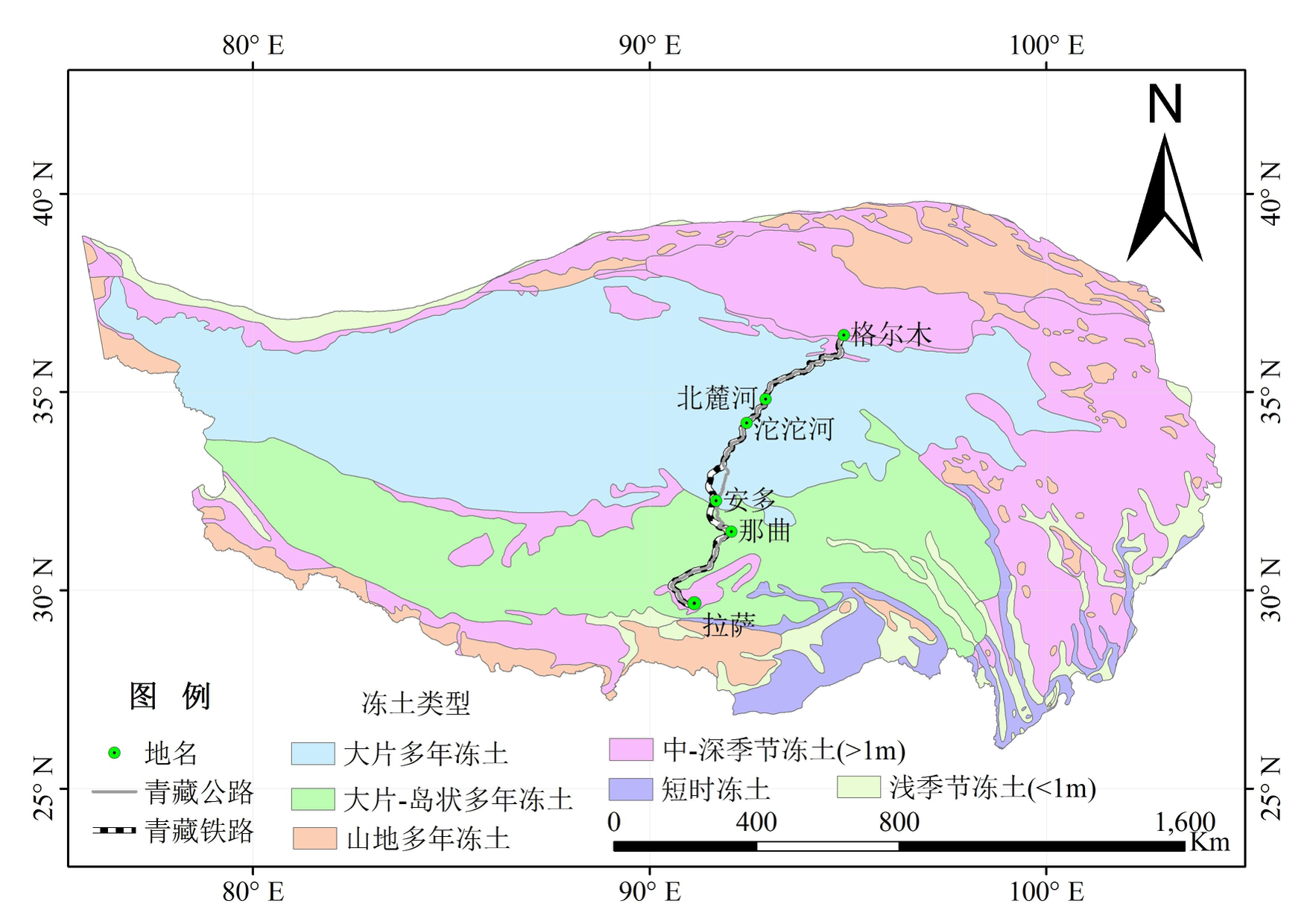