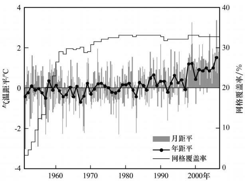 This data set contains the temperature anomaly series for each quarter and month of the years from January, 1951 to December, 2006 on the Tibetan Plateau. Based on the “China Homogenized Historical Temperature Data Set (1951–2004) Version 1.0” and the daily average temperature data from 2005 to 2006, the monthly average temperature of 123 sites on the Tibetan Plateau and its neighboring areas were gridded using the Climate Anomaly Method (CAM). Further, the average monthly temperature anomaly sequences from 1951 to 2006 were established using the area weighting factor method. To maximize the use of the observation data, the method using the data at a nearby reference station to correct the short series of the climatic standard values of the air temperature data is emphatically discussed. Reference: Yu Ren, Xueqin Zhang, Lili Peng. Construction and Analysis of Mean Air Temperature Anomaly Series for the Qinghai-Xizang Plateau during 1951-2006. Plateau Meteorology, 2010.

There are five fields in the monthly temperature anomaly data table.

There are five fields in the year and quarter temperature anomaly data table.

In the quarter field:

1. If it is null, it is the annual temperature anomaly

To respect the intellectual property rights, protect the rights of data authors, expand services of the data center, and evaluate the application potential of data, data users should clearly indicate the source of the data and the author of the data in the research results generated by using the data (including published papers, articles, data products, and unpublished research reports, data products and other results). For re-posting (second or multiple releases) data, the author must also indicate the source of the original data. Project source: National Basic Research Program of China-The Response of Environmental Changes on Tibetan Plateau to Global Changes and Adaptation Strategy2005CB422000. Contact: Xueqin Zhang, Institute of Geographic Sciences and Natural Resources Research,Chinese Academy of Sciences, E-mail:zhangxq@igsnrr.ac.cn, Tel:010-64889052.